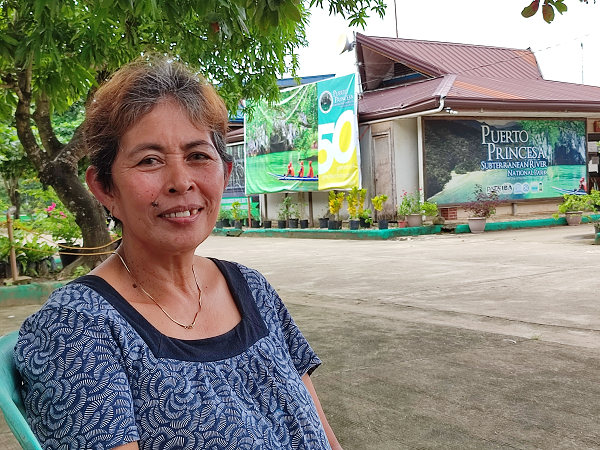 When her four children were still in high school, her husband died.

“I was already the mother, but I also became the father. I had to do everything,” she said.

To support her family, Liberty Gregorio, 53, decided to set up a souvenir shop right by the Puerto Princesa Subterranean River National Park, a protected area and wetland of international importance in Palawan. In 1999, the United Nations Educational, Scientific and Cultural Organization inscribed the 222-square kilometer national park into the World Heritage List, boosting its status as a world-renowned international tourist destination. 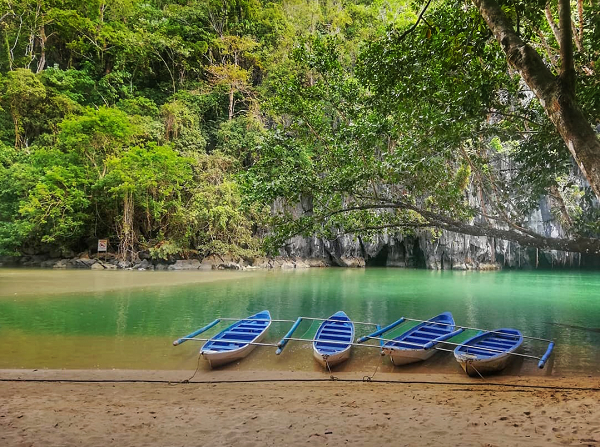 The Puerto Princesa Subterranean River National Park is a protected area of the Philippines, a UNESCO World Heritage Site and one of the New 7 Wonders of Nature. (Credits: USAID SIBOL)

In addition to selling souvenirs, Liberty also invested in a tourist boat to take advantage of the influx of visitors in their area. Her entire family depended on the income they earned from tourists who were eager to visit the limestone karst mountain landscape and the 8.2-kilometer river that runs underneath it. With her earnings, Liberty paid for her four children’s college education, with three of them obtaining their degrees.

With her children now grown and leading their own lives, Liberty lives alone on a mountain, tending to her garden and taking care of pigs and chickens. She has dreamed of helping her children set up their own businesses, but when the coronavirus pandemic hit the Philippines in 2020, her plans were put on hold. The Philippines closed its borders to tourists, effectively cutting the lifeline for Liberty and local communities that depended on tourism industry.

“When the pandemic hit, our world came crashing down. We had no more livelihood,” Liberty said. She had to close her souvenir shop and repurpose her tourist boat as a fishing vessel so she could eat.

“If there’s enough catch, we are able to buy rice. But if there is a typhoon and the weather is not good, we can’t go out to fish,” she said.

Eager to safeguard what remained of her livelihood, Liberty joined a community-managed savings and credit association, or CoMSCA, organized by USAID’s Sustainable Interventions for Biodiversity, Oceans and Landscapes (SIBOL) project, last August.

SIBOL is a five-year project that works to improve natural resource management and biodiversity conservation in five protected areas in the Philippines, including the Puerto Princesa Subterranean River National Park. The project works with the country’s Department of Environment and Natural Resources, Bureau of Fisheries and Aquatic Resources, and the Palawan Council for Sustainable Development to implement its programs.

To realize its objectives, SIBOL helps local communities living within the protected areas become economically self-reliant and responsible stewards of the environment.

At its heart is the establishment of CoMSCA groups. In 2021, SIBOL set up 10 CoMSCA groups within the local communities. Groups range in size from 10 to 20 members, and are dominated by women.

CoMSCA members meet on a weekly basis to buy shares, provide loans, and support financing needs of their members. The cost of one share depends on the group’s agreement and capacity to save, and a member can buy up to a maximum of five shares. Loans issued are based on priorities identified by the group, and could be up to twice the total share purchased by a member. Members determine the loan size they would like to take based on their need and capacity to pay.

Through CoMSCA, resources are internally generated. Members agree on their own rules, which give them a sense of ownership, and all transactions are open to scrutiny. Groups also learn how to handle their own money, and members collectively decide how to use it.

SIBOL introduced concepts like fiscal management, sustainable financing, and the value of community relationships to group members. CoMSCA members create an environmental fund, wherein members set aside a portion of their collections to fund efforts such as coastal clean-ups, mangrove rehabilitation, and information campaign materials that help promote conservation in their areas. As memberships grow along with their pools of funds, SIBOL will also connect members to microfinance institutions so that they will have access to larger funds that can support household-based or biodiversity-friendly enterprises.

After attending the CoMSCA orientation on the first day, Liberty convinced two of her friends, who eventually signed up. Seabloom B, the CoMSCA group of which Liberty is a member, has so far raised around USD 1,150 from its members five months after its establishment.

“We see the money. We know where it goes, so there is an assurance that it will come back,” Liberty said. Loans can be used to support small businesses or spent in case of emergencies.

Her participation in CoMSCA allows Liberty to meet other members every Saturday during their meetings. Sharing jokes and socializing removes her stress, she added.

However, just four months after Liberty’s Seabloom B was established, another tragedy struck as Typhoon Rai (known locally as Typhoon Odette) hit the Philippines in December last year. With maximum sustained winds reaching 195 kilometers per hour, the typhoon killed more than 400 people and destroyed or damaged 1.4 million houses. Government estimates placed the infrastructure and agriculture destruction at USD 646 M. The typhoon ravaged through Palawan, which had been previously spared from typhoons of such magnitude.

Strong winds peeled off the entire roof of Liberty’s house. Some of her chickens died, and the tourist boat that she converted into a fishing vessel also sustained damages. However, Liberty had obtained a CoMSCA loan weeks before the typhoon hit, which worked in her favor.

“I bought a few pieces of galvanized iron for roofing from the money I borrowed in December, so we were able to repair our house. I used the remainder for basic needs because the typhoon destroyed everything,” she said.

If not for the association, she would have continued to spend what remained of her meager savings and live without a safety net, Liberty added.

Currently, Liberty is back to tending to her animals and her garden. The boat is still under repair, and she looks forward to using it again for fishing.

“We have high hopes that through CoMSCA, we will be able to lift ourselves together from poverty,” she said. CoMSCA groups abide by rules that ensure transactions are transparent to all members. (Credits: USAID SIBOL)

The pandemic has continued, and the tourism industry that once flourished around the underground river is yet to bounce back. Liberty and her friends remain committed to participate in their savings and loan association to help them survive the present circumstances.

“We will take care of this,” she said. (SIBOL/ Jo Javan Cerda)