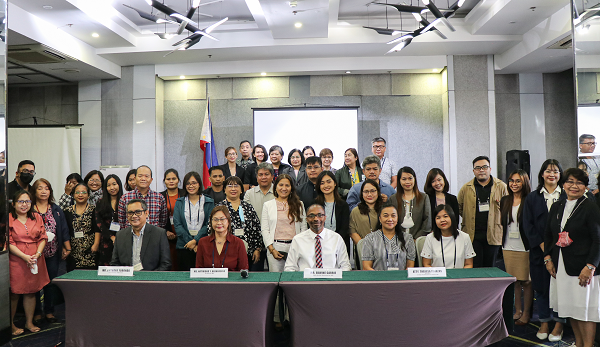 The Department of Environment and Natural Resources (DENR) - Biodiversity Management Bureau (BMB), with support from the United Nations Development Programme (UNDP) in the Philippines, conducted a national inception of the project called Implementing the National Framework on Access and Benefit Sharing of Genetic Resources and Associated Traditional Knowledge in the Philippines. The Access and Benefit Sharing (ABS) Project is funded by the Global Environment Facility (GEF).

The event’s intent was to validate and harmonize strategies for the Project Results Framework and Multi-year Work Plan. It was also an opportunity to invite initial commitments from key stakeholders to support the ABS project’s full implementation for the next six years.

DENR Undersecretary Analiza Rebuelta-Teh said that the project aims to strengthen the implementation of the Nagoya Protocol on Access and Benefit Sharing in the Philippines. This could be realized by strengthening the national Access and Benefit Sharing framework and developing national and local capacities to advance the fair and equitable sharing of benefits from using genetic resources.

She identified some cases for the ABS Project to look into, such as the oil extract of ylang-ylang flowers (manufacture of high-class perfumes), saluyot (manufacture of anti-stress drug), and other Filipino herbal medicines like sambong, lagundi, and takip kuhol, which have been biopirated and patented without proper recognition and reward to the sources. A UNDP Philippines-commissioned study estimated that the country loses USD 8.1 million annually in foregone royalty earnings for a single pharmaceutical product derived from a Philippine genetic resource that was patented by a foreign company.

He highlighted UNDP’s commitment to support the country's ownership and leadership of the project’s delivery of target outputs.

“I would like to emphasize the need to have our communities be at the forefront of the overall mechanism that we will develop, so that we may do our share in the implementation of the Nagoya Protocol on ABS. We envision ABS to provide an avenue for confidence-building between the government and communities, so that collaborative effort and resource complementation can be undertaken,” Carrie said.

DENR-BMB OIC Director Natividad Bernardino rallied the support of government agencies and key stakeholders to come up with a harmonized and unified ABS system in the country. She cited Article 15 of the Convention on Biological Diversity, which states that the authority to determine access to genetic resources rests with the national governments and is subject to national legislation, and for which the project embodies.

“Perhaps this unified or single process will eventually raise the awareness of our people, the government agencies and the industries concerned, including the indigenous peoples and local communities. The aim is to have a dynamic and vibrant ABS system that will contribute to generating wealth for the country. This project gives us an opportunity for a fresh start to have an ABS system that we can all be proud of,” Bernardino added.

The implementation of the ABS Project serves as an opportunity to advance the inclusion of endemic and abundant genetic resources in the value chain, consequently increasing their market value. The project is a step forward to developing at least two bioproducts from local genetic resources of banaba in Region III (Central Luzon) and pili in Region V (Bicol Region).

Atty. Theresa Tenazas, OIC Division Chief of the Wildlife Resources of DENR-BMB, acknowledged the fervent participation of representatives from the government, NGOs/CSOs, and the private sector that helped to realize the objectives of the event, and looked forward to the conduct of Regional Site-level Inception.

The Project Management Unit of the ABS Project, headed by Mr. Anthony Foronda, will be conducting the site-level Inception workshops in Region III and Region V tentatively on July 18-22, 2022. (ABS Project/ Orange Omengan)

This article originally appeared on https://bmb.gov.ph/index.php/resources/news-and-events/232-denr-bmb-and-undp-conducted-a-national-inception-workshop-for-the-access-and-benefit-sharing-project