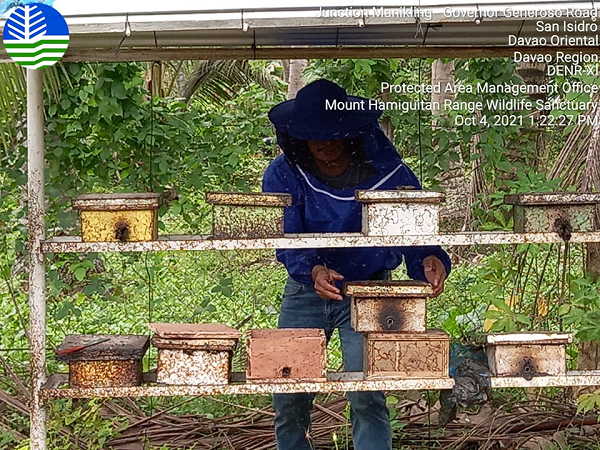 An employee takes care of the beehives

Davao Oriental – One of the emerging sectors of agriculture here in the Philippines is the apiculture or the practice of cultivating or raising bees on a commercial scale for honey production. Bees are known to be among the key players in pollinating the ecosystem that greatly contributes to the rapid regeneration of forest reserves.

In 2019, the Mount Hamiguitan Range Wildlife Sanctuary (MHRWS) inaugurated a beekeeping project (“Beekeeping as Biodiversity-Friendly Community-Based Enterprise in Mount Hamiguitan Range Wildlife Sanctuary and Expansion Areas”) within the municipalities of San Isidro and Governor Generoso in Davao Oriental as an ingenious means of providing alternative livelihood to the surrounding communities, thereby reducing their dependence on and utilization of natural resources, particularly timber and minor forest products, within the protected area.

The project engaged the services of the Green Solutions Agricultural Farming Training Center (GSAFTC) to provide, among others, trainings, promotional work, and experimental and demonstration site. The last one became all the more important because as pests wreaked havoc on colonies, the space provided served as a recovery facility for surviving pest-infested colonies before these were transferred back to their optimal sites.

On the part of GSAFTC, the observed impact of bees’ presence on improved crop production and quality was convincing enough.

“We agreed to allow the farm to be used for the project operations as we were initially told that the bees would only be relocated temporarily while the project gathered the relevant data. However, after we saw the impact of the stingless bees’ presence within the farm on improving our crop produce, we immediately told the project coordinator to allow some of the colonies to remain. Eventually, that experience influenced our decision to acquire our set of beehives, although of different bee species, to employ as pollinators in the area,” GSAFTC Manager Reyjun Medrina said.

James Olivar, owner of GSAFTC, admitted that the training center was delighted with its collaborative work with the project as this presented a unique opportunity for the training center to demonstrate the role of bees in crop pollination to their trainees in organic agriculture.

In the first quarter of 2022, a Memorandum of Agreement between the MHRWS Protected Area Management Board and GSAFTC to cement the partnership and expand on areas of collaboration was finalized and is currently scheduled to be signed by all parties concerned. (Beekeeping Project/ Shaira Mae P. Pagayawan)