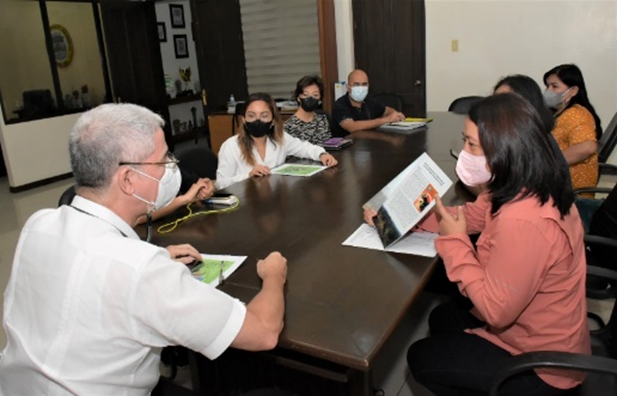 8 September 2022 – Newly re-elected Governor Eugenio Jose Lacson of Negros Occidental said that he would pursue biodiversity financing within the province. This he revealed during a courtesy call by the Biodiversity Finance Initiative (BIOFIN) of the Department of Environment and Natural Resources (DENR), UNDP Philippines, and the Philippine Biodiversity Conservation Foundation, Inc. (PhilBio).

During the meeting, the governor promised to allocate budgets for biodiversity programs and projects in the province for the conservation and protection of the environment.

BIOFIN is also working with the provincial government of Negros Oriental to ensure that biodiversity is mainstreamed in the provincial plans and programs.

RA 7160 or the Local Government Code of 1991 empowers local government units (LGUs) to have meaningful autonomy in attaining its full development and self-reliance so that they can become effective partners in attaining national goals. The code provides fiscal powers and authority to government officials to propose, appropriate and release funds to agencies, programs and projects. It provides for a more responsive local government structure instituted through a system of decentralization whereby LGUs are delegated more powers, authority, responsibilities and resources.

Seeing this LGU function as an entry point, BIOFIN has been working with LGUs since 2016 to mainstream biodiversity in local plans and programs, thereby ensuring regular financing. The localization of the BIOFIN methodology at the provincial level is an eye-opener for partners not only from the Negros Oriental and Negros Occidental provinces, but also for PhilBio, BIOFIN’s responsible partner, which assists the LGUs in preparing their biodiversity finance plans based on their provincial biodiversity strategy and action plans (BSAP).

In the beginning, developing finance plans was relatively new to the provinces and PhilBio. Nevertheless, after a series of trainings and consultations with them between 2016 and 2019, they have been able to derive comprehensive costing estimates of their biodiversity strategy and action plans (BSAPs), analyze local policies better to encourage biodiversity financing, and identify definite entry points in the planning and budgeting processes to mainstream biodiversity conservation in other sectors within the LGU structure.

In 2018, both provinces completed the Negros Island Biodiversity Strategy and Action Plan and its accompanying Negros Island Biodiversity Finance Plan. They identified several finance solutions that would be piloted this year with assistance from BIOFIN and PhilBio. These are: a) maximizing locally available funds; b) accessing national government funds through alignment and synergy (alignment of their BSAP to the Regional Development Plan and to the DENR workplan); c) engaging the private sector (corporate social responsibility); d) tapping earmarked funds (ER 1-94); and e) generating revenues through environmental fees such as the Tourism Ecological Fee.

Of the 20 biodiversity provincial targets of Negros Occidental, 70% have on-going activities with budget allocations. One of these is the inclusion of a program on the Southwestern Negros Key Biodiversity Area in the Provincial Development and Investment Plan 2020-2024 with an annual allocation of PhP 20M. To date, the program has benefitted 101 individuals from the local community and has planted a total of 170 thousand seedlings, 155 thousand of which are native seedlings.

“The communities who were directly hired to plant the seedlings and provided with livelihoods benefited greatly from this program especially when Typhoon Odette came in December of last year. For instance, they used whatever money they saved from their incomes to rebuild their houses felled by the Typhoon,” PhilBio Executive Director Lisa Paguntalan said.

In Negros Oriental, 18 out of the 111 programmed activities are on-going. Biodiversity programs and activities have been incorporated and see an increased allocation from PhP 300,000 to PhP 3M in the new Provincial Development and Physical Framework Plan 2020-2026.

Paguntalan stressed that the synergy in plans of local government units would pave the way in increasing investments in biodiversity of both Negros provinces.

“The entire process of localizing the BIOFIN methodology at the LGU level provides a valuable learning experience to all participants including the Negros Island provinces, PhilBio, and even us in BIOFIN,” BIOFIN Philippines Project Manager Anabelle Plantilla recounted. “The stakeholders and BIOFIN partners now have a better understanding of both the BIOFIN methodology and finance solutions and this will be realized thanks to the assurance and commitment of Governor Lacson.” (BIOFIN 2/ Angelique Ogena)