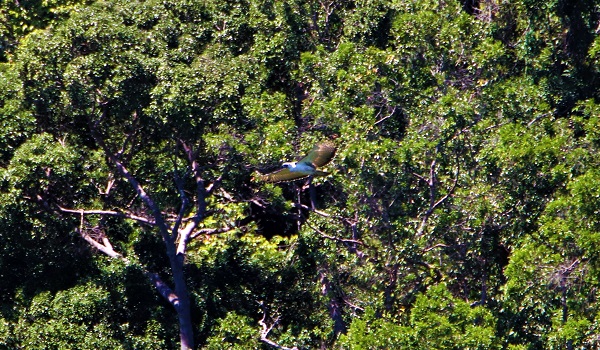 For years, proof of Philippine eagles (Pithecophaga jefferyi) inhabiting the Pasonanca Natural Park in Zamboanga City consisted merely of brief sightings by forest guards and eagle feathers found on the forest floor. But this changed in 2019 when, for the first time, a Philippine eagle family and their nest were fully documented and observed in a series of field expeditions led by the Philippine Eagle Foundation (PEF), together with partners from the Zamboanga City government, Zamboanga City Water District, Department of Environment and Natural Resources (DENR), and United States Agency for International Development (USAID).

Threatened by hunting and habitat loss, the Philippines’ national bird has around 400 pairs left all over the country, half of which can be found in Mindanao. While Philippine eagles have been studied intensively in various parts of the region by PEF, an eagle subpopulation in Zamboanga Peninsula, including those in Pasonanca, had not been studied and fully understood yet.

“We can only save what we can understand,” said Dr. Jayson Ibañez, PEF Director for Research and Conservation. “For a critically endangered species like the Philippine eagle, finding, studying, and protecting each individual bird in the wild are the only means to save it from extinction.”

This led PEF, USAID, and partners in Zamboanga City to roll out the first-ever field study to survey Philippine eagles and find an active nest within the park. The 17,000-hectare protected area is one of the few remaining intact forests in Zamboanga Peninsula, making it an important habitat for many bird species and other wildlife. Comprising a series of expeditions, the field study aimed to locate nesting sites in the park, record and observe behaviors of resident eagles, and tag and monitor live Philippine eagles. 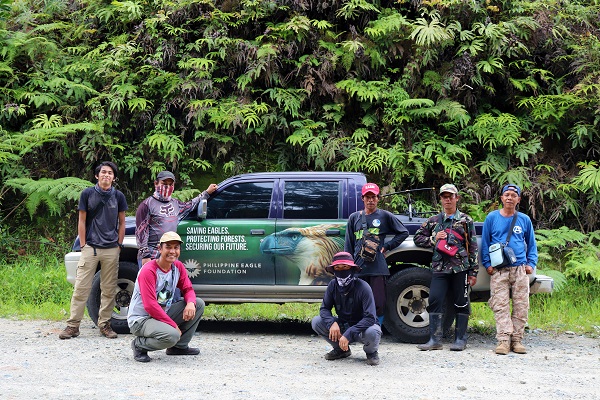 Expedition team out to conduct study on Philippine eagles

The expedition team was composed of personnel from PEF, the city government, and local DENR; forest guards from Zamboanga City Water District who regularly patrol Pasonanca’s forests; and representatives from universities in the city. PEF and USAID chose this multisectoral approach to involve partners in experiential learning on eagle research, and to ensure that eagle conservation efforts are sustained beyond the field study.

“Eagle conservation is never the work of just one person. It requires partnerships, multiple skills, and resources toward a common goal,” said PEF Executive Director Dennis Salvador. “This collaboration paves the way for building regional capacity on research and conservation to help address the unique needs of Philippine eagles in Zamboanga.”

Find an eagle, find the nest

In October 2019, the team embarked on their first expedition inside Pasonanca, just in time for the eagle breeding season in Mindanao. Team members set up at their observation posts—both on the ground and high above on tree platforms—on a site near the edge of the park. Using scopes and binoculars, they scanned the forest canopy every day to search for signs of eagle activity. After almost 10 days into the expedition, an adult Philippine eagle was finally photographed emerging from a tree line—the first time that the national bird was officially documented inside Pasonanca. The male eagle was seen carrying a large prey and was spotted by the team for three consecutive days. These observations mean that the eagle could be providing food for a potential mate and their eaglet, and that an active nest was not too far from the site.

“Finding active eagle nests and protecting them is very important,” Dr. Ibañez said. “As centers of reproduction, protecting nesting areas ensures that eagle pairs can nest safely and that their young survive to become future breeders for their species.”

The team returned for a second expedition in November to December 2019 to record more sightings of the male eagle, observe its behavior, and map out its flight patterns and home range, with the goal of locating its nest. The team also scoured the forest for clues, such as eagle droppings, prey remains, molted feathers, and large masses of ferns growing on tree branches that could be suitable nests for eagles.

Finally, on the morning of December 4, 2019, as the team spotted the male eagle flying from a tree canopy after delivering food, an adult female eagle emerged into view from a thicket of ferns. From afar, the team observed the nest and its feathered dwellers, including a healthy and well-fed one-month-old eaglet. This was the first active Philippine eagle nest recorded in Pasonanca and the third in the whole Zamboanga Peninsula.

“The presence of an eagle nesting pair and their young is strong proof that conservation is working in the park.” Dr. Ibañez explained. “Eagles breed and nest only in safe and healthy forest habitats. If forests are intact, that means the rest of biodiversity therein is also diverse and thriving.”

Hope for an endangered species

Things took an unfortunate turn when the team returned in January 2020 and saw the nest was empty. When the team climbed onto the nest, they found a few feathers, small bones, and skin patches of the eaglet, with no sign of its parents. The team collected the scant remains of the young eagle and sent these to the University of the Philippines for DNA and genetic tests. While the cause of the eaglet’s death is still uncertain, such a tragedy is not uncommon among eagle parents in the wild. PEF data shows that three out of ten nesting attempts of Mindanao eagle pairs can fail even in optimal environments due to natural causes, such as sickness or accidents. Inexperienced eagle parents breeding for the first time are also more likely to lose their young.

Not all hope is lost, though, as the team spotted the eagle parents numerous times in February and March 2020. Both eagles showed courtship behaviors, such as exchanging sex vocals, soaring together over their territory, and attempting to lock their talons, with the male even attempting to mate with the female on a few occasions. These are hopeful signs that the eagle pair could renest and lay a new egg again.

In the meantime, the team continues to monitor the eagle pair while also preparing the site for trapping and tagging, in hopes of catching at least one of the adult eagles and fitting a GPS tracker to follow its range and movements in the forest. This information can help experts pinpoint areas of Pasonanca that are hunting and breeding grounds for eagles, which can then be prioritized for stronger protection and conservation measures.

“We hope to see a new nest and track the nesting pair and their new eaglet in future expeditions. We also think that there could be three more eagle pairs in Pasonanca,” Dr. Ibañez said. “Finding these pairs, and studying and monitoring them, will be very important to eagle research and conservation in the region.”

The expedition team’s discoveries in Pasonanca underscores the urgency to protect Philippine eagles in the region and avoid a catastrophic loss of these iconic birds in the wild, especially as escalating diseases and epidemics threaten not only humans but endangered raptors, as well.

“We think these eagles may have adaptations and behaviors that are unique to their bloodlines as a result of adjusting to unique environmental conditions in the Zamboanga region,” Dr. Ibañez explained. “The key to preventing species extinction is saving as many unique bloodlines as possible, and maintaining their genetic diversity to allow eagle populations to adjust to an ever-changing world.” 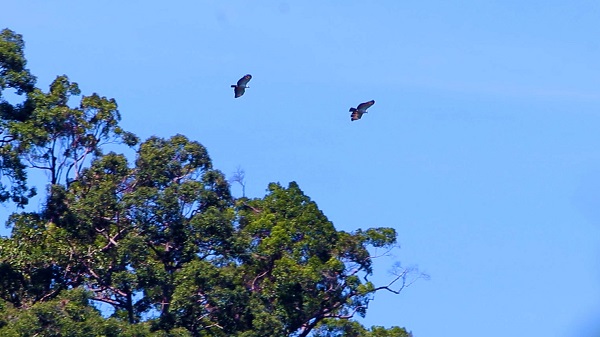 A pair of Philippine eagles flying together

Initial findings of the ongoing field study are already a clear validation of Zamboanga City’s commitment to safeguarding Pasonanca Natural Park as a protected area and a vital watershed. Conservation measures put in place by the city government and DENR and regular patrolling and enforcement by forest guards of Zamboanga City Water District have translated to pristine forest habitats in Pasonanca that are highly favorable for nesting eagles.

For its part, USAID, through its Protect Wildlife project, supported partners in the city to enhance their plans and strategies for effectively managing Pasonanca as a protected area. The project also trained the water district’s forest guards in enforcing forestry and wildlife laws using modern techniques.

“Gracias a Dios y con orgullo that the Pasonanca watershed is also a habitat of the Philippine eagle. With evidence of the presence of Philippine eagles in Zamboanga City, there is indeed hope for future generations to continue conservation and protection of our precious watershed and its vital ecosystems,” said Zamboanga City Mayor Maria Isabelle Climaco. “Our researchers, in partnership with DENR and USAID, collaborated efforts in preparing our forest land use plan and in identifying indigenous flora and fauna. We commit to mobilize efforts to make our natural habitats safe for God’s precious creations.” (PWP/ Lawrence San Diego)