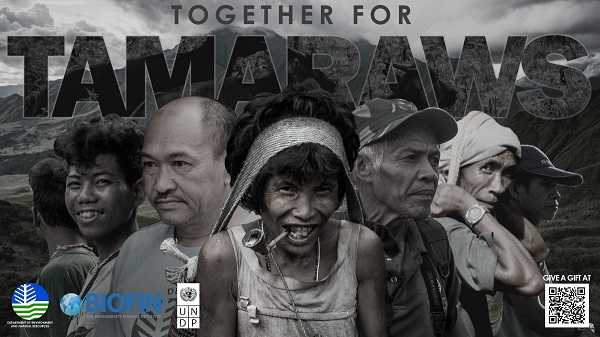 16 July 2020 (Manila) – The Philippines and 35 other countries officially launched #TogetherforTamaraws, an online fundraising campaign to help conservation front liners affected by the COVID-19 pandemic. This campaign is led by the Biodiversity Finance Initiative (BIOFIN) project in the Philippines with support from the United Nations Development Programme (UNDP) and the Department of Environment and Natural Resources (DENR) through its MIMAROPA Regional Office, and the Biodiversity Management Bureau.

Dedicated rangers and wardens of the Mounts Iglit-Baco Natural Park (MIBNP) and Tamaraw Conservation Programme (TCP) have been conserving the tamaraw – the world’s rarest and most endangered buffalo species – for decades. The wardens also serve as guides and porters for tourism and research expeditions.

Sadly, one of the 24 TCP rangers together with 32 of the 35 Taw’buid Mangyan wardens who patrol the area to deter tamaraw hunters and poachers, have lost their jobs due to the MINBP’s closure following community quarantine measures. Now, only 23 TCP rangers and three MIBNP wardens are expected to patrol a core area of 2,500 hectares inside the 106,655-hectare MIBNP, which hosts at least 480 of the world’s 600 remaining tamaraws.

The campaign was launched to gift tamaraw front liners with critically-needed field allowances and food so they can continue protecting the tamaraw, and other endangered flora and fauna of Mindoro.

“We launched this global campaign because we saw local communities and rangers, the front liners of conservation, being strongly impacted by the loss of income from tourism,” explained Onno van den Heuvel, BIOFIN global project manager. “Exotic places like the Iglit-Baco mountain range might seem distant to most people, but they must be conserved. Rangers and wardens need and deserve our support to keep doing good conservation work.”

BIOFIN hopes to raise approximately PHP1.149 M to help secure allowances and provisions for tamaraw front liners until the end of the year. Readers can give gifts at any amount online through bit.ly/TogetherForTamaraws.

“When our grandparents were still alive, forests were plentiful and full of wildlife. Over 70% of the country was covered in pristine forest, but only a million hectares are now left,” said Titon Mitra, UNDP Philippines Resident Representative. “We’re losing 200 football fields of forest cover daily and in this fix is the tamaraw, of which only about 600 are left. I hope each of you can make a small contribution. In doing so, you play a big part in securing the livelihoods of our tamaraw wardens and rangers who are doing such an exceptional job in protecting this critically-endangered species.”

Since its inception in 2012, BIOFIN has worked with both public and private sectors across 36 countries to enhance protection of the world’s top biodiversity hotspots by helping secure funds to implement sound biodiversity programs.

The ranger and wardens who were laid off are members of the Taw’buid, Iraya and Buid tribes – three of Mindoro’s eight Mangyan tribes. They are enforcers and educators to their fellow tribe members on the significance of conserving the tamaraw, a traditionally-hunted but highly-revered animal.

“For years, our rangers have been operating without proper patrol gear and equipment. Salaries are often delayed and no one has health or social security benefits,” explained TCP head Neil Anthony Del Mundo.

“This pandemic should bring forth empathy and not drive us to apathy,” said Occidental Mindoro Congresswoman Josephine Ramirez-Sato, who delivered the first tranche of relief gifts to the rangers today. “Let us all help our rangers and wardens in saving the tamaraw. This is the spirit of Bayanihan. Even as we wear masks, stand three feet apart and stay safe in the comfort of our homes, we can and we must do our part. Our contributions will go a long way and will make a difference. Bayanihan is possible amidst one of the greatest challenges of our time. Let’s show our families, our communities and the world that we will be together for the tamaraws!”

Though they need our help, the rangers and wardens have decided to voluntarily continue patrolling despite the dangers. “Lockdown or not, we’ll put our own health on the line to protect our tamaraws,” vowed Ed Bata, senior TCP ranger. (BIOFIN Philippines)

(This article originally appeared in https://www.ph.undp.org/content/philippines/en/home/presscenter/pressreleases/202-/-togetherfortamaraws-campaign-launched-to-help-tamaraw-rangers-a.html)