Open burning of garbage, with all its associated negative impacts on human health and the environment, used to be the norm in Solid Waste Management. Thanks to initiatives like the GEF-funded UNIDO project “Demonstration of BATs and BEPs in Open Burning Activities” involving five Asian countries, what used to be the norm is gradually changing for the better.

Open burning of garbage, defined as “thermal destruction of waste by means of direct exposure to fire,” has been identified by numerous studies as a leading cause of chronic respiratory diseases. It is also a major contributor to the unintended release of Persistent Organic Pollutants (uPOPs) into the environment. RA 9003 or the Ecological Solid Waste Management Act of 2000 and RA 8749 or the Clean Air Act of 1999, respectively, provide for a comprehensive solid waste management strategy and an air pollution control policy that specifically prohibit the open burning of wastes and imposes stiff penalties for violations of these provisions of the law.

Despite these laws being firmly in place for over two decades now, open burning activities are still rampant all over the country. In backyards, agricultural farms, in side streets, even inside the yards of formal establishments like schools and offices, not to mention the numerous open burning activities happening in small and large dumpsites, open burning continues to take its toll on public health and the environment.

In 2015, the United Nations Industrial Development Organization (UNIDO), with funding support from the Global Environment Facility (GEF) and in partnership with the environment departments or ministries of the five participating Asian countries, started implementing the project entitled “Demonstration of Best Available Techniques (BATs) and Best Environmental Practices (BEPs) in Open Burning Activities in Response to the Stockholm Convention on the Persistent Organic Pollutants (POPs).” For decades prior to the implementation of the project, the participating countries (Vietnam, Lao PDR, Cambodia, Mongolia, and the Philippines) were struggling to deal with the deleterious effects of open burning of wastes and garbage.

An inventory of the releases of polychlorinated dibenzo-dioxins (PCDDs) and dibenzofurans (PCDFs) among the participating countries revealed that open burning activities account for approximately 1,118 g Tons Equivalent/year (TEQ) of uPOPs releases into the environment. PCDDs and PCDFs are POPs that are unintentionally released during the open burning process.

The main objective of the project was to put into place resource efficient waste management systems to reduce uPOPs emissions through the introduction of BATs and BEPs in open burning activities while targeting a reduction of approximately 90% of current PCDD/PCDF releases in the pilot demonstration sites of participating countries.

During project implementation, a National Project Management Unit (PMU) of each participating country utilized different approaches to meet the project’s objectives. In order to promote the inclusion of BATs/BEPs in the management of solid waste, five components were targeted for implementation. These included legislative improvement, which involved conducting a review of existing regulatory protocols and introducing improvements thereto to strengthen such policies, development of standards and guidance to regulate POPs releases from open burning, and identifying financing mechanisms to support BAT/BEP in waste management and recycling initiatives.

The second one is institutional strengthening, which entailed addressing the lack of sound technical and analytical capability and experience as well as the absence of a standard methodology for uPOPS monitoring and the lack of a regional information sharing system in and among the participating countries.

The education and awareness raising activities, on the other hand, revolved around Persistent Organic Pollutants issues like the risks and impacts of open burning releases on human health and the environment including the knowledge and understanding of BAT/BEP. Under this component, numerous trainings and information dissemination campaigns were conducted not only to inform but to capacitate the different stakeholders specifically in managing waste.

The major component of the project was the demonstration activities and interventions that showcased the most appropriate options for BAT/BEP in pilot sites. These interventions helped address the lack of scientific studies and show the benefits that could be achieved through BAT/BEP in open burning sector. Monitoring and evaluation protocols were also established to monitor the progress and impacts of the project.

A number of activities were conducted under this component due to the lack or insufficiency of regulations to address open burning and uPOPs releases in each of the participating countries. Through the project, all five participating countries introduced improvements to existing regulatory instruments either in the form of a technical guideline/guidance or an amendment to existing waste management protocols. For the Philippines, a draft National Solid Waste Management (NSWM) Resolution to fully enforce the provisions of RA 9003 on open burning was delivered.

Having a thorough knowledge of the current situation is vital for any waste management initiative. Accordingly, an assessment of the impacts of common and traditional open burning practices in terms of releases of uPOPs, Greenhouse Gas (GHG) emissions, and other contaminants into the atmosphere, and of the effects/benefits of BAT/BEP application including inventory reports on type and number of disposal sites were also done in the five countries. In the Philippines, such a study confirmed that changes in waste composition had occurred with the introduction of products and packaging manufactured with hydrocarbons and chlorinated compounds such as plastic, solvents, or pesticides. Burning of wastes containing traces of chlorine compounds releases a substantial amount of dioxins and furans into the atmosphere. The study also estimated that about 30% of the population still resorted to burning their wastes as the means of disposal.

Sustainable financing of solid waste management (SWM) systems is a pressing issue in low and middle- income countries. SWM has not always been a priority of every administration and even of the public in general. In the five participating countries in general, despite the implementation of a number of development projects and the inclusion of SWM in local government plans and programs, funding for such solid waste management initiatives has been a major stumbling block. In the Philippines for example, a number of funding windows are available for solid waste management projects but these have largely remained untapped. Through this project, a manual describing all available financing and mechanisms and sources for SWM programs was compiled to provide a comprehensive guide for its users. Copies of the manual were made available to every region in the country through a training conducted for the regional solid waste management coordinators as well as education and information officers.

An Integrated Solid Waste Management Toolkit to Implement BATs and BEPs in Open Burning activities was also produced by the project and a Regional Trainers Training was conducted and attended by participants from each of the participating countries.

Under this component, various regional and national trainings were conducted in all participating countries to guarantee that knowledge transfers, awareness raising, and technical capability were enhanced. Regional Training of Trainers (TOT) on POPs monitoring, analysis, and sampling methodologies was conducted by the Dioxin Centre of Environmental Monitoring in Vietnam and this was attended by technical staff from all participating countries. Regional and National Trainings on BAT/BEP in Open Burning and waste management, Trainings for Technical Staff on disposal facilities, and Training workshops on Financing Mechanisms and Incentive Systems in support of BAT/BEP implementation were conducted in all countries.

To strengthen the Joint Laboratory capacity for POPs analysis of the Ministry of Environment and Tourism and the Mongolian Academy of Sciences in Mongolia, some laboratory equipment was also provided by the project.

Demonstration of Activites in Pilot Sites

Tailor-fitted technological interventions in identified demonstration sites were put into place in each of the participating countries. The combined impact of these interventions taken as a whole is estimated to achieve a reduction of 38,987.58 mg TEQ/year as against the targeted reduction of 35,167.2 mg TEQ/year. 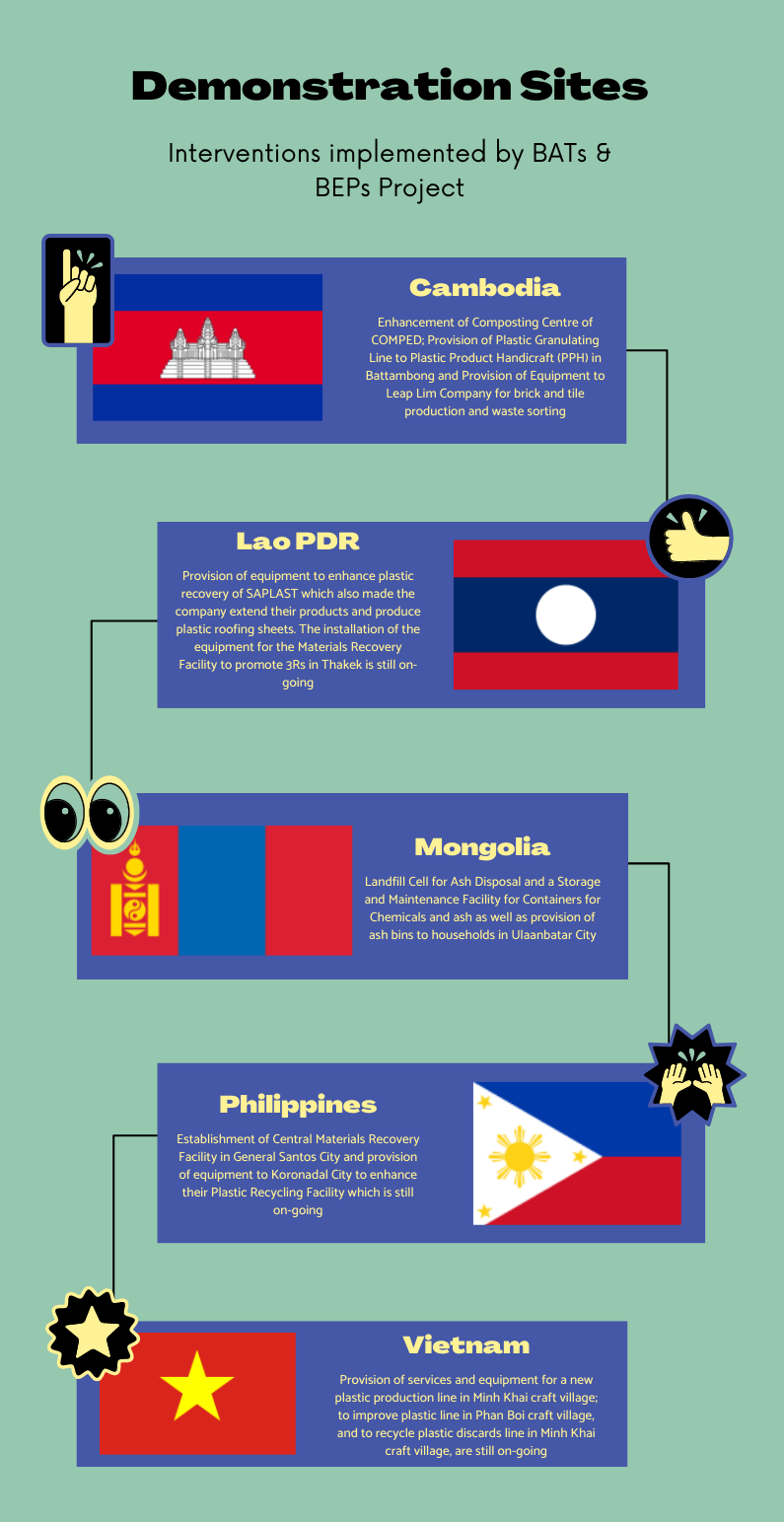 Sampling of different parameters to measure uPOPs releases in the demonstration sites was conducted in all the participating countries as part of monitoring and evaluation component of the project. Currently, all collected data from the sampling sites are being collated and analysed to determine estimated decrease in uPOPs releases into the atmosphere.

All relevant stakeholders have to be sufficiently informed of the hazards that POPs pose for the environment and health. Local stakeholders were informed, engaged and capacitated on preventive actions for open burning activities and alternative technologies for recovery and processing of POPs. These also included thorough discussions of the management, recycling and reuse of wastes in open and controlled dumps.

Various activities were undertaken in each of the countries to reach as many stakeholders as possible. National project websites were established and continually updated for the duration of the project. All major awareness raising events were conducted and participated in by different sectors and stakeholders. These activities included photo and poster making contests, fun-runs, clean ups, youth debates, cycling and tree planting events. For the poster making contest, the Philippines was voted as the Regional Winner and was awarded this distinction in Vienna, Austria.

All targeted trainings and workshops such as trainings on health, environment, and waste management (e.g. alternative biomass utilization, recycling and reuse, plastic waste management) were conducted to cater to the needs of each sector. Regional training on waste management planning was conducted and was attended by representatives of different sectors from the participating countries.

The education curricula at university level focusing on BAT/BEP in waste management were also developed: Cambodia – curriculum on BAT/BEP in waste management; Lao PDR – course syllabus has been adopted and is now part of the teaching program in the department of Mechanical Engineering, National University; Philippines and Vietnam – courses were given to energy engineering and environmental students respectively; Mongolia, – a textbook on solid waste management and uPOPs for university students was developed and an online training for university professors on the implementation of the textbook was also organized.

As the project winds up, the project results are scheduled to be transferred to the government partners in each of the participating countries by the end of 2021. In the Philippines, a Sustainability Management Plan has been developed for the project. It is important that the implementation of BAT/BEP interventions introduced in the cities of General Santos and Koronadal in southern Philippines, along with other activities of the project, are sustained for the long term.

It is significant to note that transparency and open and frequent communication and consultation with stakeholders have made the project implementation more meaningful and remarkable. The challenges in getting stakeholders to be fully engaged will always be there and will always be difficult. However, consulting them early on, involving them in planning, recognizing their interests, and incorporating their insights into the decision-making process will surely encourage them to be part of any project implementation, and would definitely contribute to its success and sustainability.

It is indeed difficult not to take notice of the accomplishments achieved in each component of the project by each of the countries involved. Considering the active involvement of the project partners, their roles and responsibilities as implementers, the trainings and technologies received and their sense of ownership over the project, all of these have somehow helped local stakeholders manage their waste properly and avoid open burning. The project has assuredly provided the impetus for each participating country to sustain the project activities well into the future. (UNIDO Philippines)